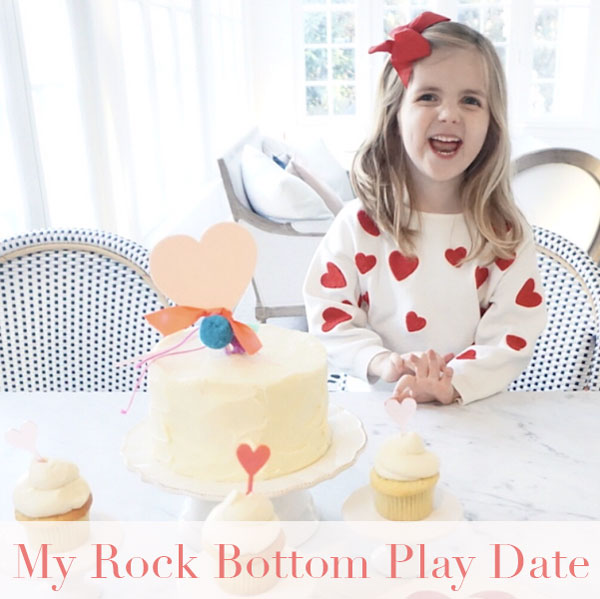 This was a post- and a party- that was intended to be titled “Lilly’s Pretty Sweet Play Date” but, I’m not gonna lie to you guys, it brought about a rock bottom moment for me.

I’ve never claimed to be a Pinterest mom. I’m far from it. But I apply my own pressures independent of the search engine. I love to plan a good party, always have. Half of the fun, for me, is in the theme, details and finding and acquiring items from all over. The build up is almost always more satisfying than the actual event. And, if I’m being honest with myself, I never have that much fun in the moment, because I’m not. So much time is spent in my head. “What did I forget? Did I take enough photos? How does that look? Does so-and-so have wine? Is that person standing alone? Is the oven timer going off? Did I put out the plates?” The endless hampster wheel never slows long enough for me to hear anything other than my thoughts, to really enjoy my guests or, gasp, my children.

This particular event was just an end of the week gathering with some of my best friends and their kids and I decided to make it a Valentine’s Day fête. It happened to fall after Zach had been gone for two weeks in a row and I was exhausted and overextended but I forged ahead. Thankfully, I had childcare that day but instead of using the time to take care of myself, allowing a nap, workout, massage, movie, writing, reading, resting… anything that would’ve served me better, I ran (and I mean ran!) around all day gathering and collecting more things. Even after my friends implored me not to. Just a few more treats, another craft. A bottle of bubbly. Some party favors. For a play date!

I got home and worked at a frenetic pace to get it all done in time. There were baked goods in the oven, heart ornaments outside in the grass drying from the can of white spray paint I’d doused them with, praying they’d be ready in time (Once everyone arrived and the madness began, I never even went out to check and Zach found them days later.), kids tables set up, photos taken…

Lilly got home from school and was so excited about the sugar. I was too busy balloon tying to regulate, she consumed more than most kids should in a week and, as a result, was impossible to deal with. So I didn’t even try. I let her reek havoc in between my reprimands, the DIY’s went basically untouched as did the desserts (One friend cancelled, another was on a diet.), I think I got one full conversation in with my friends and Zach came home to a complete sh*t show. Stains on our brand new velvet chairs, cookies crushed up everywhere, tons of dishes in the sink…

After the tornado of toddlers ran through, he spent two hours cleaning while I sat on the tile floor, glass of wine in hand, watching Lilly in the bath. Instead of paying attention to my daughter, I was scrolling through photos, deeming them not good enough, punishing myself from posting at all and feeling sorry. Actually, sorry isn’t the right word. I was disgusted. Appalled. Ashamed. What the hell happened to me?! Why do I always take things too far? Put such unrealistic, ridiculous demands on myself?

As a result, there’s only one way to go, one way to feel and that’s down. Others feel it too. Poor Zach has picked up the pieces of my manic behavior for 11 years. If I’m not careful, Lilly and Oliver will someday soon too. And I’m willing to bet most of my friends and family members would also prefer I just chill the eff out, enjoy myself and them, rather than obsess about the perfectly placed cake plate. I once wrote an article for another website titled, “How to Plan the Perfect Party” and my last tip was, “Relax because if the host isn’t having fun, no one is.” HA! While true, it’s ridiculously hypocritical.

My party perfectionism, (perfectionism period), pressure and stress I put on myself has got to stop and if it took a botched Valentine’s Day play date (Don’t get me wrong, the kids had A BLAST. They know nothing of my bottom.) to do it, with my best, supportive friends, who, up until this post, really knew no differently either, then I consider myself lucky. And, let’s face it, there are far worse things to be addicted to than party planning. But, truthfully, it extends beyond that. The unattainable vision in my head, social media standards I set myself to, OCD tendencies…

I took the weekend to lick my self-inflicted wounds and then got to work. This unraveling and overcompensating is obviously a poor attempt to fix much bigger problems (isn’t it always?) that I’m not yet ready to address, at least publicly. But I’m working on them privately. And, more importantly than the actual issues, is my treatment of myself. I say I love myself and I do but I haven’t done a good job of showing it lately, if ever.

Like most women and moms, in particular, I put everyone else first. And it’s time for that to change. Because I can’t prioritize them if I’m not even here. And the rate I was going, I’d be in a mental ward or morgue by May.

Part of me hates that this sweet image of my girl and my memories of her that day with her friends are tarnished with this awakening of mine. But I couldn’t, in good conscience, run this post as a picturesque event alluding to the idea or image that I have or had it altogether.  I won’t ever lie to you and I’m done lying to myself.

I was actually slated to do another post and promote it tonight and I started stressing and editing photos like a mad woman to get it done, sacrificing moments with my kids, making me moody, but I stopped. Last year, that wouldn’t have been the case. I would’ve killed myself to stay on (my own self-imposed) deadline. Instead, I reevaluated and chose to go with this one- how fitting.

I’ve spent the past month (the play date was at the end of January) slowing down even more, which is evidenced by this being the first post in, I think, 22 days and the longest I’ve ever gone in between publishing something. Even after my miscarriage, appendicitis and Oliver’s birth, I was right back to blogging. All of my side projects (except the consulting and writing jobs I was being paid for) and dreams had to take a bit of a backseat too.

I’ve read books (something I hadn’t done in a long time), taken naps, started seeing an acupuncturist, picked up my workouts again, am trying to eat healthier, spend more time on skincare, with friends and on things like organization and time management. While it seems silly, I now allow myself to watch a whole TV show without a computer in my lap or constantly scrolling my phone (For me, social media can be so inspiring and productive but it also gets to a point where, if I’m not in the right mindset, it’s damaging as well.) and, most importantly, I’ve made a real effort to be kind, patient and forgiving to and of myself. I’m proud to report that, after only a month, I’ve felt a significant improvement in my overall health and happiness.

And, for now, I’ve sworn off hosting gatherings all together, even moving Lilly’s birthday party from home to an event space, where they do most of the work. I also halved the guest list and decor. This is not to say I’ll never plan again, it’s in my blood and truly, at the root of it, it does make me happy. I just have to get a better handle on things before I proceed- with caution and, most importantly, my children and myself, in mind.