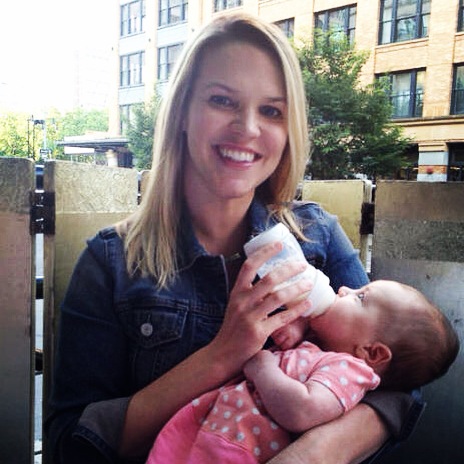 My Breasts Are Broken: One Mother’s Struggle to Nurse

It’s 5:00 a.m. My daughter is sleeping, therefore I should be too. Every mother knows when your baby sleeps, you sleep as you don’t know when the next precious window will present itself. But every writer knows when inspiration strikes, you capitalize on it, to hell with sleep.

I’m laying here in a pool of tears and breast milk, the former brought on by the latter. I’ve spent considerable time over the past several weeks grappling with anxiety, stress, anger and confusion over my predicament. The amount of space taken up in my decidedly clouded baby brain and the energy devoted is insurmountable. But this is actually the first moment of clarity I’ve had since my journey with breastfeeding began almost a month ago.

As a self-involved young 20-something when my sister had her first child, I used to tell her if I ever actually had kids, I’d never breastfeed. I thought it was inconvenient (cut to me washing and sterilizing bottles what seems like every minute of every hour a decade and a half later), annoying and, after one glimpse of her National Geographic breasts, gross, at best. I talked such a big game and was so convinced I’d bottle feed.

Then I had a child.

And all I wanted to do was be able to nurse her. It wasn’t even a logical, rational, premeditated thought rather an instinctual need. I had to breast feed my child. And, so, as soon as she was placed on me, mere moments after our first skin on skin contact, I was feeding my daughter the only way I could now fathom: by my breast. It felt like the most organic thing in the world. It also felt the most painful. (Okay, second most as I’d just gone through — unintentional — natural childbirth. But that’s a whole other post!)

I figured every new mother is in pain while first feeding; after all, most of us aren’t used to someone sucking the life out of our nipples. Those that are, more power to you and your sexual preferences.

I’d gone to breastfeeding class, knew all about proper form (nose to nipple!), different holds, how to break a latch and the importance of being relaxed and calm. I also knew my baby and I would get there, confident we were already a good team, sure I was all she would need.

I was wrong. And that revelation has been nothing short of devastating.

After 60 hours of what I thought was successful albeit painful nursing, my daughter stopped latching altogether. It was 1:00 a.m. on our first night home. By 5:00 a.m., still no feeding, a frantic baby and panicked mom (and dad), I sent my husband to the 24-hour pharmacy for some Pedialyte. She had to be hydrated. The thought of formula didn’t even cross my narrowed mind.

By 10:00 a.m. I was at Babies ‘R’ Us as they opened to buy a pump for my engorged breasts. At 1:00 p.m., a full 12 hours later, I was at the pediatrician with my jaundiced and drastically dropping birthweight baby. I sobbed throughout the entire appointment. The tears didn’t stop there. I cried all day, all night, uncontrollably.

I’d starved my baby. Because of me and my broken breasts, she’d gone hungry and now was dangerously close to heading back to the hospital, smaller and in poorer health than when she arrived there. Day three and I’d already failed as a mother.

The doctor said we needed to supplement with formula as I clearly wasn’t giving her enough breast milk. As much as I’d dreaded that word hours before, it was now a savior.

Once she was satiated and sleeping, I called a lactation specialist. She was at our apartment within hours. The next three were spent in the most humbling way. As a stranger was kneading my breasts and pinching my nipples, my husband holding the pumps, catching what little I had to offer, I wondered how I’d gotten there. Not long ago, he and I were sipping wine on a beach, conflict-free. And the breast activity that followed later involved no pain or embarrassment, motorized contraption or third party.

At the end of the session, after we’d exhausted every technique and accessory imaginable, we were no closer to a solution than when we started.

Apparently I have retractable nipples, making it hard for them to reach the back of my baby’s throat. As a result, she can’t feed properly, causing her to become frantic and “uncoordinated.” It turns out, I also have a very low milk supply. I read somewhere that those who suffer from lactose intolerance often find it difficult to feed. Ironic, isn’t it? I do, indeed, struggle with dairy. But I had no idea that lifestyle inconvenience might some day make my daughter malnourished.

Since nursing proved impossible, I began to pump. I tried all speeds and every combination. With each lull and surge, my prayers intensified. Please open up, make more, let this be the time we break through. I drank dark beer, sat in steamy showers, used hot compresses, massaged my battered breasts, took breaks between sessions, varied the time and intensity… Hoping, pleading that the latest technique would be the answer. None of them were.

Compounding my sadness, my daughter could smell the milk on me. As a result, she’d root for my breast and become despondent when I couldn’t give it to her. Holding her became difficult. Not holding her was heartbreaking.

After weeks of pumping and supplementing with formula, she no longer reaches for my breast. It should be a relief. It’s not. It’s incredibly upsetting. It’s as if I’m not her mother, just another person giving her a bottle. I’ve almost forgotten what it was like to bond like we did at the hospital. Except I haven’t. That fleeting feeling will always be with me as, pain included, it was one of the most beautiful of my life.

After four weeks, it’s finally happened. I’ve run out of milk. As I lay here at 5:00 a.m. and the last drip drains, I’m slightly relieved not to have to pump incessantly, wash and sterilize all of the extra parts and have nipples that are chaffed and bloodied. But mostly to end the charade that this may work for me, for us. I’m exhausted from pretending this is my path.

I’m also tired of the shame that comes along with it. Unfortunately, it’s not just self-induced. I’m still shocked at how many people ask whether I’m breastfeeding, a rather personal question in my opinion. And I’m saddened by those — medical professionals included — who display disappointment after revealing that my child is, gasp, formula fed.

I will likely always mourn the loss of my baby on my boob, having the most natural of bonds, the feeling of milk inside of me, being able to provide what no one else can.

But I know that in the big picture, this is just a tiny piece of the postpartum puzzle. My child will grow up knowing her mother did all she could and went to every length imaginable to provide for her. She will grow up period. And without the “dreaded” formula, that wouldn’t be possible.

This is not about me. (Nothing pertaining to parenthood is.) She needs me to provide for her. That means giving her nutrients no matter what form or source, she needs to bond with me whether it’s by the breast or the kisses I give her, songs I sing, cuddles, snuggles, hugs, laughs… She needs love and that, unlike milk, I have in abundance.