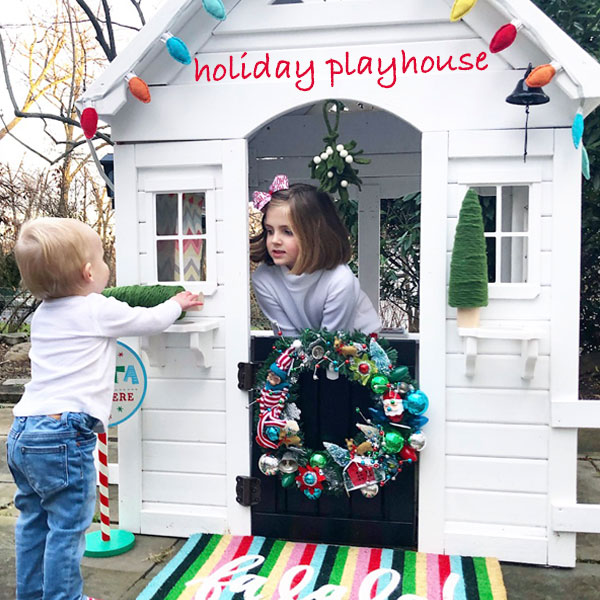 Those of you that watched my Instagram Stories over the summer and fall know the saga that was the kids play house. I saw a makeover on another blog that I fell in love with, was set on recreating it for my own kids, ordered the house, it was damaged in shipping, they canceled it and didn’t tell me and my dad came up to help Zach paint it. I had to place the order again and while I was waiting for it to arrive, visited a new friend’s house, saw their from scratch custom treehouse and had major second thoughts. After all, Lilly is now 5 and I felt like we might have missed the window with this little house. Nevertheless, the second one arrived, in tact, Zach and I had been out at the Taylor Swift concert sans kids till late the night before, consumed a few cocktails and I made him get up and put together a tiny cedar home… and then paint it. After going with me to Taylor Swift. He got major points that weekend.

Honestly, we finished it a little too late in the season for them to get to play with it much and Oliver was maybe a touch too little still but it was all worth it for this holiday house makeover. Mama’s dreams came true. I had so much fun shopping for items, we all had fun decorating it and the two of them got such a kick out of playing with it all decked out. I can’t wait to trick it out for summer too and really watch them play with it. But, until then, enjoy our holiday house… 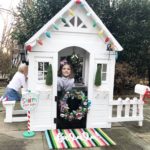 Oliver decided it needed a refresh and moved the trees, took the sign… It’s not his first foray into design. He stares at a photograph in our house, points out light fixtures and new decorations, maybe he’ll be an interior designer? A mom can hope! 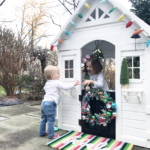 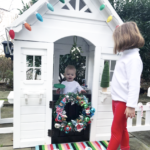 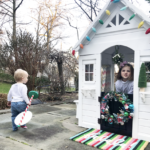 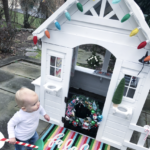