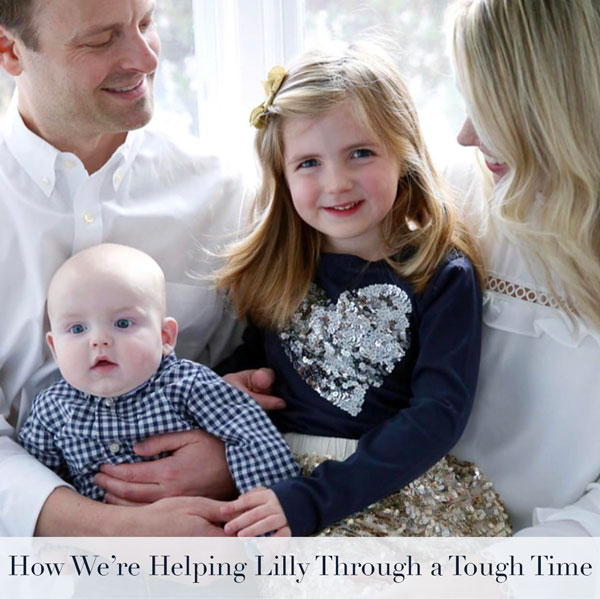 How We’re Helping Lilly Through a Tough Time

Lilly was a super star baby. Slept through the night at 8 weeks and continued to sleep like a champ, taking epic naps in addition to her full nights, ate well, played well… we really never had one problem with her (beyond some GI issues) and I still thought it was hard! Then she hit 22 months and we began to see some signs of stubbornness.

By 2.5, she was a full on terror, so strong-willed and opinionated, testing us at every turn. For the last several years, she’s been a challenge (and, simultaneously, the most loving, kind, thoughtful, polite, bright and fun little girl).

She’s the kind of kid you need to talk into things. If we let her, she’d stay in her PJ’s, inside all day, till she was 18. Or maybe 25. It is a STRUGGLE to get her out of the house, dressed, hair brushed, fed… There is a lot of negotiating that goes down, on good days. On bad, I threaten her life and she’s in the car far quicker. 😉

She’ll often say she doesn’t want to have friends over, go to a playdate or party and, of course, once there, has the time of her life and never wants to leave. Unfortunately, these habits are extended to school too and always have been. She was enrolled in a fantastic program in Tribeca for 2’s and 3’s that she- and we- loved but, still, many mornings she’d fight me about going. Once there, however, there was never a problem. And she got rave reviews. They called her a “leader”, which is teacher talk for bossy, but she was a confident, inquisitive, clever little girl who was far better there than at home.

Then this year rolled around and, granted, we’ve thrown a lot at her: move, new state, school, sibling… But she transitioned well. She was so excited to start (I think she’d been at home with me far too long!), was happy and confident her first day and ran home all smiles. The second day she regressed a bit but that’s to be expected as the novelty wore off. I also think she was tired from all the excitement of the first day. It got better from there. She was loving her new friends, teachers, activities (Spanish, yoga, music!) and we breathed a big sigh of relief that our girl was, once again, responding well to school.

Then, the tears started. About three months into school, she called me up to her bed one night in hysterics. It was about a boy at lunch bunch (she goes to an extended hour of school before her actual 3-hour program). She was beside herself and said she didn’t want to go anymore. When I asked her questions, she wasn’t able to or didn’t want to articulate it. So I gave her a little pep talk and wrote it off as stalling for bed, being overtired, thinking it would blow over. Wrong. The next morning was even worse. She was panic-stricken, shaking, so upset about the thought of going to school.

I held her home from lunch bunch that day so she could calm down and I could try to talk to her- and the teachers. I never want to be “that” mom but I was truly terrified that maybe my child had been harmed as I’d never seen her like this before. They responded right away saying that they were aware of something going on (They believe in working things out in the classroom and only coming to parents if it’s been persisting for awhile or a major problem, which I appreciate because, let’s be honest, the cord needed to be cut a little bit with Lilly and myself.). I was comforted by the fact that, in their eyes, it hadn’t gotten to the point where they felt like they needed to come to me yet, discouraged that there was actually something they had to be “aware of” and not just a figment of Lilly’s imagination but also relieved that she hadn’t completely made this up. Parenthood, man. The range of emotions you go through.

As far as they were concerned, there was no physical contact and, to their knowledge, no verbal issues either. They seemed to think that Lilly was intimidated by two boys that are not in her regular preschool class but in the hour of lunch before.

(To her credit, after this first altercation, I was at an all school event and observed one of the boys putting another in a full WWE-style headlock and tackling him to the ground, despite being half his victim’s size. It was slightly terrifying to me and I’m not a preschooler!)

They suggested, and I agreed, that she should return the following day and not be removed from this particular group so they could work with her on the tools to use when there is someone you don’t like or want to sit next to.

As a mother, I want to validate her feelings, let her know that what she’s feeling is real, okay, “normal” and understandable and that she can talk to me at any time, about any thing. It’s so important for me to lay that groundwork now so when she’s older, we’ll have that relationship, she knows she can come to me, trust me, confide in me. But, also, as much as I want to, to not fix her problems. To not think that just because she doesn’t like some one or some thing, that Mama’s gonna come in, throw her post-baby weight around and solve all. I know those kids; they don’t fare well in the real world.

I wish I could say that this was all resolved and were back to being blissfully unaware but that’s not the case. But it has gotten much better. There’s only the occasional cry leading up to or on the way to school and it’s often when she’s sleep or food deprived. But she still gets worked up and concerned about where she’s sitting, if they’re next to her and, when they walk past her in the hall, she goes from being sunny, funny Lilly to bowing her head down and hiding behind me, which breaks my heart a little bit each time it happens.

I’ve tried to instill in her that, unfortunately, there are going to be boys and girls who make poor choices throughout her life, people that say and do things that aren’t nice but that she cannot let it get to her, change her course of the day, steal her joy but they’re tough concepts to grasp at four-and-a-half.

She did finally (Keep talking to your kids! Try at different times, with different approaches, eventually it’ll come out!) confess that they never did anything to her but they called her best friend, a boy, a baby, which is the ULTIMATE insult at this age. Part of me wanted to laugh, part was thrilled that it wasn’t something they had done to her and part was annoyed that we have been through such a saga over something so silly. This?! This is what all this is about?!

And then there was part that was so proud. What a loyal, little friend, fiercely protective of her own. And I have no one to blame but myself. I’ve been known, in the past, to get in epic battles over- and for- my friends. And, it appears, my girl is following suit. She’s already standing up to bullying, however small, innocent and juvenile it may be.

I tried to tell her that he (who, by the way, is totally oblivious to all of this!) could handle himself, that she didn’t need to let what they said about him upset her, especially if it didn’t bother him but her mind is made up. What’s done is done. And, so, we’ve had to work on this weekly, if not daily. Some days, she runs home all proudly, “Mommy, I sat next to X and didn’t let him bother me!” Or, “he wasn’t there today!” Others, there’s reports of them being “not nice again”.

(It must be said, that she leaves school so, so happy. Running up to me and excitedly telling me every little detail of what she did that day, wanting to stay with her friends, requesting play dates, not wanting to head home.)

And just when I thought we were getting a decent handle on the school situation, she went to her first gymnastics class last week, which she had been talking about for months, was so excited about and came out crying, saying she never wants to go again because some boy called her a baby! What the F?!

And now we need to deal with this little bugger and get her comfortable enough to continue there too. Clearly, “baby” is the insult du jour. Clearly, she’s also a sensitive soul, which is not a bad thing but, in this case, I just wish she wouldn’t let it get to her so much. Zach, of course, wants to take the kid (and his parents) out!

So, it’s a work in progress and I hope and pray we’re handling it in the best possible way. I just hate that she has to go through this already. Can’t she stay a “baby” a bit longer? Then again, maybe it’s better she’s developing the tools now and will be better off for the next bully.