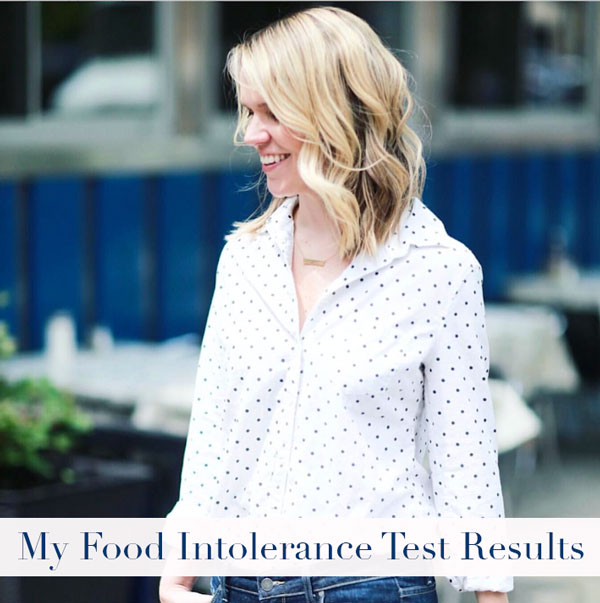 My Food Intolerance Test Results (and History of My Digestive Health)

A few weeks ago, I posted about the Pinner Test and got a tremendous response from all of you.  I never knew how many women struggled, like I do, with their (digestive) health.

For nearly fifteen years, I’ve dealt with crippling cramps in my stomach as a result of what I’ve put in my body. Stress, which there’s been a heavy dose, is also a contributor but it’s the reaction to food and drink that, I believe, has been the biggest culprit.

It started at around twenty-five, which I’m told is when it happens for a lot of women as those are prime child-birthing years. Or, at least, they used to be. If you’re like me or any of my friends, that’s a decade too soon. And, I guess, since our body is not doing what it’s “supposed to” (insert eye roll), it acts out? I’m grossly generalizing here but that’s the gist an actual doctor once told me.

There were too many times in my twenties that I canceled plans, crawled home to fetal-position-it on the couch, with a street pretzel or cluster of Saltines clutched in my hand, while nursing sips of ginger ale. Pepto and Immodium became my best friends, which is apropos because I never saw my real ones anymore.

I finally made an appointment with a GI specialist and had every test even remotely applicable run. I even had my first colonoscopy the same time my parents had theirs. Speaking of old people ailments, I also developed Shingles. I’m so ahead of my time!

One of the most relieving things you can read on a medical evaluation is negative. It’s also one of the worst. Because where do you go from there? At least with a diagnosis, there’s a plan. And I’m nothing if not a planner. I’m action-oriented, love a good goal and am driven to a fault. I need something to solve, work towards and for.

So I started an elimination diet. I should note, I’m also an all or nothing nut so, instead of eliminate one thing at a time, I did it all at once. I remember going out to eat with my parents that first night and bursting into tears looking at the menu. There was nothing I could consume, not one. Everything had dressing, sauce, cheese, was made with oil, gluten, grease…

But I got better. My writhing on the floor fits that were happening several times a week, went to every few weeks to every few months. And, I, slowly, added things back in. But not all of it. And most of it with taking a soluble fiber capsule or two before. (To be clear and very transparent, I alternated between bloating, constipation, diarrhea and gas. Equal opportunity! But these supplements seemed to help.)

I remember very early on in dating Zach, pumping my system full of Immodium (hot!) before a date so I could drink and eat whatever I wanted and not have it affect the aftermath of the evening. Shortly thereafter, when I knew he was a keeper, he’d hold my meds for me in his pocket when we went out. Talk about true love.

Looking back, it’s no wonder I was struggling. I was in an extremely intense, pressure-filled job, constantly traveling, trying to afford and adopt a New York lifestyle and filling myself with such filth like 2-liters of Diet Coke, coffee and tons of Splenda a day. My body was 75% artificial sweetener. Why wouldn’t it combust?

So the Aspartame was out. Gone. Goodbye. I’ve never had another Coke or faux sugar packet to this day. And it’s made the world of difference. (By the way, I switched to seltzer, which I highly recommend for those of you needing a little fizz.) I wish I could say the same for the rest.

But it’s been a journey. I know that gluten, dairy, alcohol, fried foods and sauces don’t agree with me. So I have them in moderation.  But even that’s in moderation. Sometimes, I’m soaring. Others, I’m barely surviving. It’s a roller coaster and I hate those. And along with the dips and turns goes my emotions, my health, my energy level… So much is impacted by my consumption choices, which you would think would make it easier to abstain. But I’m human. A human who really, really loves bread, cheese and wine. And, so, this awkward dance has continued for a challenging decade or so, which brings me to today and the Pinner Test.

I actually reached out to them. Because I’m over it. Over feeling this way. Over the guessing game. One of my friends who’s also struggled, was tested for Celiac pre-kids and it was negative. Post? Positive. We change and so do our bodies. In that vein, I wanted to try this test and see if it showed anything differently than I’d previously believed or been told.

And boy did it! I got it back several days ago and dumbfounded is a good word to describe my reaction. I thought, for sure, all the aforementioned things: gluten, dairy, soy and caffeine would come up. Nope. What did? Salmon, egg yolks… and chicken. Chicken!

Chicken, I thought, was one of my safe foods. As a result, I’ve eaten the crap out of it for the past twenty years. On salads, sandwiches, in rice, pasta, eggs, wraps… My God, So. Much. Chicken. It makes me look at everything differently. Was it actually the dressing that was the problem or the chicken? The pasta or the chicken? The soy sauce or the chicken? You get the (g-free) gist.

And the egg yolk is also enlightening because all along I assumed it was the gluten in the baked goods that bothered me but perhaps it was the egg yolks?!

The salmon I could care less about because, luckily, I’ve never liked it.

Now, I know, this is just one test and I need to take it with a grain of salt (which bloats me) but it was definitely eye opening and I’m going to try to eliminate these things and see if it makes a difference. I’ve started buying (and will soon be making) vegan baked goods and, so far, I feel better. I haven’t been able to quit chicken (It’s hard to end a thirty year relationship!) yet but it’s on my list. When I get the balls to finally breakup with it, you’ll be the first to know!

I’d love to hear if you have stomach issues and what hurts and has helped you!

*Please note that although the Instagram post was sponsored, this is not. And, like all of my partnered products I feature, it stems from a real need and interest in my life. I will never cover or promote something I don’t believe in, that’s my promise to not only myself but to you as well. I don’t care how much they’re paying me or what they’re offering. If it’s not authentic, it’s not happening.