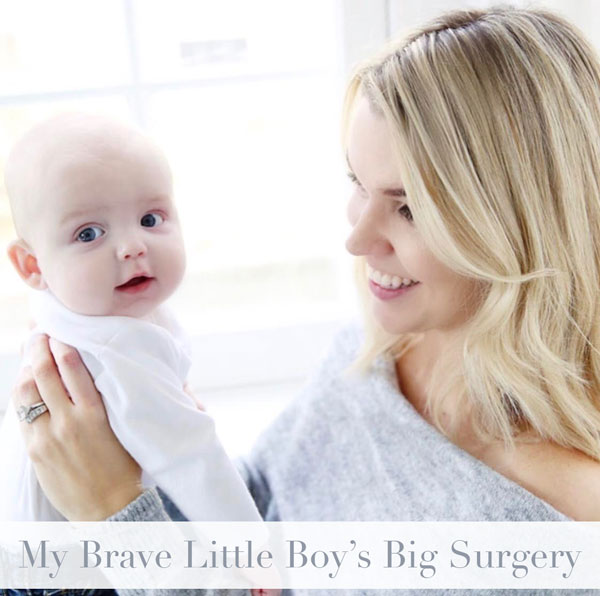 I’m pretty sure on the list of every parent’s nightmares is having their child put under. It certainly was on mine. Well, we’ve recently crossed that off and hope to never have to experience it again.

Last week, at six-and-a-half months old, Oliver was admitted to the hospital, dressed in a tiny baby gown, taken from us and put under anesthesia for an hour-long operation.

At the risk of TMI, we discovered, months ago, as he grew, that not enough skin was removed when his circumcision was done at birth. We noticed it, my in-laws, who are a pediatrician and former pediatric nurse seconded our suspicions, our pediatrician agreed and, ultimately, a pediatric urologist confirmed our fears.

(Before we go any further, the reason I’m sharing this story is not to overexpose my family or my son but for others out there who might have to go through something similar. I was desperately reaching out to friends with sons, asking if they experienced this and Googling for personal stories, beyond medical information, to see other parents’ experiences, advice, etc. and I didn’t find much.)

Since we have an older daughter, our world was girl. Therefore, we were in the dark about a lot of the boy stuff. Much to my surprise, an OBGYN did the circumcision and a very cautious one at that.

It’s apparently very common. About 20% of little boys have to- or are at least recommended to- have a penal skin plasty (a.k.a. re-circumcision). And, it’s a fairly routine procedure, as far as risk and recovery are concerned. But try telling that to any mom.

We knew, no question, we wanted to have it done. First, the thought of increased infections (due to so much excess skin) was enough of a reason. But, also, no parent wants for their child to be different or, at least, perceived that way. All kids want is to fit in. And they can be cruel, finding any opportunity to make fun of or single out another. While we can’t control everything that will be done to and said about our children, we certainly didn’t want to provide any additional opportunity, if there’s something we could do about it.

Now, having said that, we were very aware that this was a (mostly) cosmetic procedure, meaning he could absolutely live a happy, healthy, productive and successful life without it. And that’s what kept me up at night. Beyond going under, the thought that we were doing this to our baby, when it technically didn’t have to be done, overwhelmed me. The what if’s were killer. I would’ve never forgiven myself if something were to happen and it could’ve been avoided. But we kept reminding ourselves that we were doing this for him. For his health, for his future, his confidence and his quality of life.

The urologist recommended that we do it before he started crawling, which could be in just a matter of months. And, of course, we wanted to go to the best, who operates at the top hospital so that meant our timeline (he was crazy booked!) was very limited. Ultimately, it meant canceling Zach’s 40th birthday trip to Mexico with some of our best friends as it fell the week before we were to leave. Neither of us could imagine planning for such a fun and frivolous trip while we were putting our lives and emotions on hold and waiting and praying for this surgery. Nor were we prepared to leave him right after when he was healing or place the burden of that responsibility on my parents. Not to mention, had there been complications and we were unable to go, we would’ve been out of a lot of money. Obviously, it was the least of our worries but it’s just another example of the sobering realities of parenthood.

The days leading up to the surgery, I was a mess. It was as if, for weeks, my mental health was held hostage. I was so stressed and couldn’t focus on anything else. As a result, my body just sort of shut down. I’d been battling a cold for weeks and Sunday before the surgery, I woke up feeling worse than ever. After a trip to urgent care, I was treated for a bacterial infection and went back to bed for a full day.

Again, I’m aware that this was a “run of the mill” procedure but I’d fought so hard for this little boy and couldn’t believe that he had to have surgery and go under anesthesia at such a young age. In some respects, it’s better. He doesn’t (and didn’t) really know what was happening to him. In others, it’s far worse because you can’t explain it, ask him questions, tell him not to worry, reward him with a toy or treat. Also, the not eating before surgery for a baby is especially challenging and cruel.

The morning of the surgery, we woke him up at 1am to give him his last feeding and he, thankfully, went right back to sleep. Us? Not so much. But, thank God for my cold, I eventually conked back out, which I never would’ve been able to do healthy. Surgery was scheduled for 7:30am (They operate on infants first thing.), we were told to arrive at 5:30am. We tried to transfer our little guy from crib to carseat and keep him asleep but he was wide awake and, for the first hour, happy. 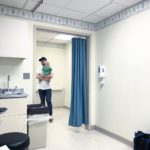 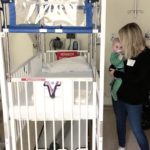 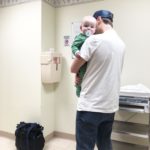 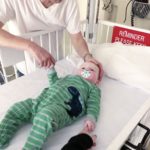 Then, he started to get hungry. And we broke out every trick in the book to distract him. Tons of toys, songs, walks, rocking back and forth… That last hour was like a ticking time bomb, on many levels. You feel so bad that you can’t feed him and he doesn’t understand. And surgery didn’t start on time, which meant more moments trying to calm him and our fears. As luck would have it, he fell asleep in my arms moments before they took him in.

He was supposed to be transported into the OR in a crib but the anesthesiologist took one look at him (and probably his nervous mama) and said, “Get me a blanket and give him to me. I’m not waking Sleeping Beauty; I’m carrying him in!” That nearly broke me. Giving him up was so, so tough and that act of kindness and compassion helped ease the transition a bit.

And, off he went. My baby boy, who has barely been out of my care for the past seven months (year plus if you count pregnancy!) and only in the hands of family and a trusted and vetted sitter, to a room of complete strangers, bright lights and sharp knives.

I held it together as we walked past the other patients and physicians but once we made it through those double doors, I lost it. Sobbing into Zach’s arms, I felt so helpless. As a mother, you’re supposed to protect your child and the lack of control I had over the situation was paralyzing. That hour plus (do surgeries ever take their allotted amount of time?) was treacherous. Anyone who has ever waited for a loved one in surgery knows the agonizing feeling of time standing still, stalking the clock, each minute passing painfully slow. I experienced it with both my father (brain tumor) and my sister (brain aneurysm) but my baby? That’s a whole other level.

Thank God for Instagram; I zoned out to other people’s lives. I could barely answer friends and family that texted, not wanting to jinx the situation. I become suddenly superstitious in moments like this.

After, what seemed like, an eternity and many checks of the unhelpful and un-updated surgery board, as well as our watches, not to mention, the whiplash we incurred every time the damn door opened and someone other than our surgeon walked out, he finally did. And looked so serious. It seemed to take forever for him to walk from the foyer to our feet.

I held my breath for the final time in weeks, as he said, “Congratulations, your son has the best looking penis in the state now!” to which I started hysterically laughing followed immediately by tears of relief.

It took about another twenty minutes (I think, it’s all a blur.) till we were able to see our boy. When they called us back, we couldn’t walk fast enough. We entered the recovery room as two nurses were trying to calm him down. My poor baby was so out of it, starving and scared as he didn’t recognize their faces. I immediately grabbed my little guy and started to shush him, something I’ve done since he was born. He calmed a bit, the bottle really did the trick though. To seem him that out of it was scary and something I never want to witness again. 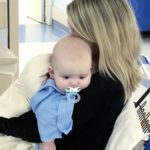 Ironically, we were just “doors” down from where I recovered from an emergency appendectomy earlier this summer, just a month after Oliver’s birth. I think it’s safe to say, we’ve given them enough business in the last year and hope to not have to see the facility again for a long, long time, if ever! That’s no knock on the staff though, who are truly remarkable. Everyone we’ve encountered from my EMT’s, nurses and surgeon to Ollie’s have been incredible. 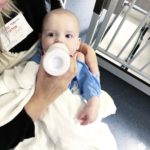 They let me sit in a wheelchair while holding him and transported us to a post-op room to make sure he could hold fluid down and, once again, check his vitals. There, I was transferred to a hospital bed and he fell asleep on me. It was the greatest feeling. The weight of my (healthy) baby on my body… I could’ve laid there forever. The room was filled with families sectioned off by only cheap curtains. You could hear and see everything. Toddlers trying to get into trouble, babies screaming but, no matter the age or severity of the situation, every bed was filled with a mama and her babe. I tear up now just writing about it. At the end of the day, we’re all the same. We just want the best for our kids. 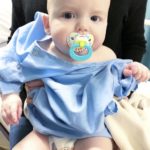 While ours was an emotional ordeal for all of us, it was a simple, quick and “easy” operation. And a voluntary one at that. My heart goes out to all of the parents of sick kids. I was one of them. I spent a good portion of my early childhood in hospitals with Spinal Meningitis, Nephritis, a kidney disease, and severe asthma. My poor parents. When I was texting my mom from the hospital, while we were waiting, about how beside myself I was, she replied, “I know what you’re going through. I’ve been where you are, my babe. I know the pain. But look at you now!” 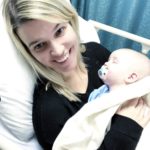 Within a few hours, we were able to head home with our healthy guy, who, besides being a bit off schedule with extreme exhaustion and hunger, you’d never know he’d gone through what he did. And, because we did it early, he’ll thankfully never have any memory of it and we don’t have to worry about crawling, walking, falling or self-investigation getting in the way of his healing.

All in all, it was a rather uneventful experience. I’m so glad we did it and that it’s now behind us. Only brightness ahead for my boy!

Thank you for sharing this personal story with us, as you have so bravely shared your life with us. This brought me to tears as I know how hard it must of been on all of you. There is always light at the end of tunnel. So happy to see him, smiling and better now! xo http://www.themoderndaygirlfriend.com insta @Moderndaygf