When I started freelancing five years ago (after having Lilly and not wanting to go back to my full time 24/7 career), it was mostly as a TV producer for my previous show and as a writer for various publications and websites. Over the last two years, I’ve expanded my business to include brands and bloggers of all kinds and sizes, which has been so fun. It’s a really nice way for me to use some of the skills I honed in my previous careers and join forces with other impressive women, while still being the primary caretaker for my children. As a blogger and writer, I’m often isolated, doing my own thing. As a consultant, I get to brainstorm, bounce ideas off of and collaborate with others. And what two better conspirators than Lacey at Oh! Canary and Lizzie at The Workspace for Children. Talk about inspiring!

When I was moving to New Jersey, my friend told me about Lacey and her studio as they shared a mutual pal. Then, before I could look her up or check it out, another friend threw her son’s birthday there and I fell in love. It was such a standout party. Creative, wholesome, sweet, fun… Lilly and I left, both convinced her birthday party should also be there. And, so, it was. Her bunny rainbow art party was one of our favorites and there have been some good ones (cooking, garden, ice cream). After Lilly’s party, which Lacey and I had so much fun creating together, we talked about the possibility of doing more with one another. I’m thrilled to be customizing a menu of the top requested themes for her, styling and sourcing all of them and presenting a template for her clients to use. There’s also the option to do a completely custom package with me too!

Through Lacey, I met Lizzie. On Instagram. We became friendly there and then met IRL and became actual friends. And when it came time for Lizzie’s daughter’s birthday, which she was having at, where else, Oh! Canary, she asked if I’d do it, which was a no brainer! Sloane envisioned a dollhouse dreamland with pink, glittery and gold accents. Oh, and rainbows and unicorns too! But, of course. Her mama, in true The Workspace for Children fashion, requested it be simple and natural, no excess (a challenge for me!), no plastic party favors. So I got to work to incorporate each of their visions.

Below is the vision board I designed for them… 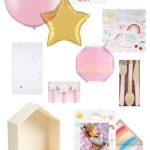 At every event, I love a focal point, which often coincides perfectly with the dessert table. This party was no exception. I also love to have some custom elements and what better way to do that than with the signage? This Sloane Is Six banner in glittery gold fit the birthday girl’s vibe. 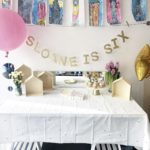 One of my favorite elements were these classic dollhouse frames that the kids painted, designed and decorated as the main event of the party but they made for such great decor before too. I put one on a makeshift riser (the bottom of another cake stand) to add some height and dimension and placed three on one side (love a trio!) and a single on the other to mix it up and not be so matchy. 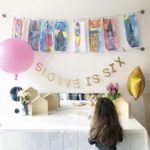 No party, even a kids fête, is complete without flowers, but they don’t have to be fancy or complicated. I swung by Trader Joe’s the morning of and picked up these simple blooms to adorn the dessert table. 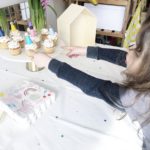 I also love one to three big, special balloons than a bunch of standard ones. I think they make more of a statement. This 30″ round pink was was the perfect pale hue. And this gold star went so nicely with the banner. If you watched my Stories, you know the day of saga that was the lost, floating, star-shaped balloon, which I thoroughly blamed on my husband. 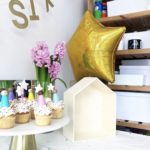 These fun napkins matched the invite, which continued the theme throughout, and were such a subtle way to incorporate the rainbows and unicorns instead of overtly so. Speaking of, I love to do separate napkins and plates so it’s not overkill. These iridescent pink plates were perfect for Sloane. And I love the natural and pink cutlery which played well with the rest of the decor as well. 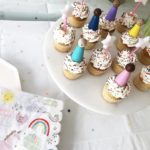 When it came to food, Lizzie kept it so simple, which I loved. It was a 10:30am party after all. Just sweet, mini cupcakes that I placed on a favorite plate of mine that echoed the elegant nature the event and tied together the gold accents. I had them topped with peg people (my followers and hers actually chose the rainbow, versus the natural ones in a poll on Instagram Stories! You totally made the right choice- thank you!) to echo the dollhouse theme and some, of course, with star candles. Everything sat on this subtle cloth that mimicked the colors of peg people and the party as well as replicated the stars throughout. 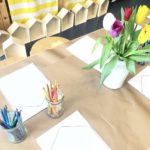 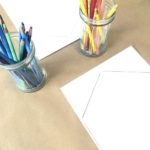 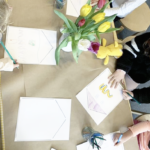 The ladies made mock ups of the houses on paper for when the kids came in so they could color and plan their visions as guests were still arriving and Lacey, as usual, placed a ton of amazing materials (peg people, cardboard scraps, cloth swatches, buttons, beads, pom poms…) out for the little ones to use in their DIY creations. 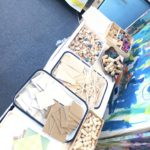 And, as you can see, they had a blast making such unique and imaginative masterpieces. I wish I could’ve stayed and made one! 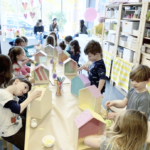 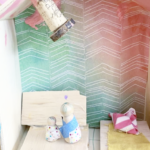 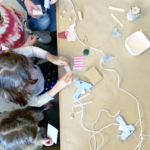 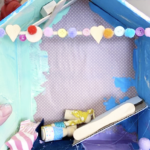 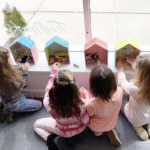 Something we didn’t end up going with but I think would make such a cute guest book is this dollhouse book. Or you could order one extra dollhouse frame and have the kids all sign that for the birthday girl (or boy)! Also, these sticker books would make really cute favors, albeit a bit pricey. You could also send home custom play dough in a cute jar with a house cookie cutter attached and little peg people for a sensory activity. Or do iced house cookies. The ideas are endless with this fun theme!